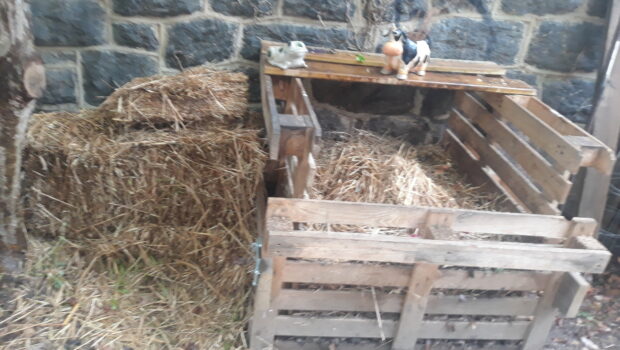 A Story of Tshuva: The Kabbalah of Compost and Climate

Originally published in The Times of Israel

Composting is one of my core spiritual practices.* Almost daily I take my green two-gallon kitchen collector filled with old cucumber or banana peels, stale kale and other smelly scraps out to the backyard bin. I toss it in and make sure to cover the smelly green stuff with brown, dry leaves and grass clippings from the big pile in the corner. It feels intuitively right and even pleasurable to return the carbon in those scraps to the soil. It’s a kind of t’shuvah – a return of those carbon molecules from an unpleasant, decaying state into one that brings life and vitality. And it’s also one of the best ways I can do something every day to combat climate disaster. Even low tech, backyard composting like I do takes carbon that would otherwise go to landfills and release methane into the atmosphere, and it stores that carbon in the ground. Our atmosphere and oceans may be filled to saturation with carbon, but the soil is actually quite thirsty for it. Composting is an even better way to sequester carbon than planting trees. Trees die eventually and they burn fairly often, releasing the carbon right back into the air. Carbon stored in the soil and integrated into the complex underground eco-system of plant roots and micro-organisms is stable and can stay there for decades, or even forever.

Composting could be a major factor in combating climate change if enough people were to practice it. Imagine what would need to happen for composting to become as common as, say, cell phones. A very different kind of worldview would need to spread across the world. We’d need to be seeing clearly not only the ineffectiveness, but also the wrongness of taking good fertilizer—those same kitchen scraps that I mentioned–and throwing them away to pollute the water or release methane into the air. A large number of people would need to feel viscerally that it is a kind of desecration to waste the life energy in those carbon molecules. We’d need a cultural shift to deeply understand that there actually is no “away” but that everything cycles back to participate in the living system that is the planet, and the cosmos. It would be a worldview that understands that nothing is actually waste: that there is a spark of good, or perhaps a spark of divinity, in everything.

In fact, that new worldview would have a lot in common with a kabbalistic worldview….

Keep Reading in The Times of Israel!