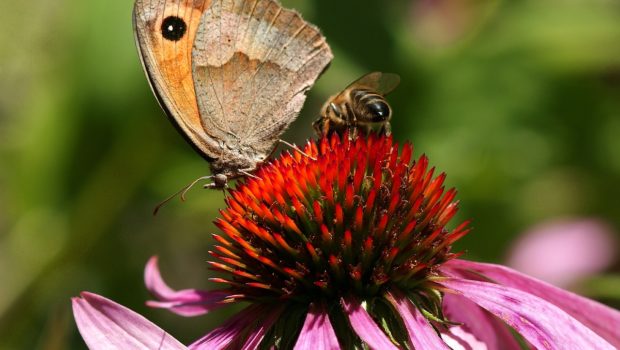 AT THE RECENT PEOPLE’S CLIMATE RALLY in Boston I saw this sign: “No Earth, No Economy.” The message is simple and direct: if you feel that you want to build a new oil pipeline, say, from Canada to the U.S., because it will create more jobs and stimulate the economy, you might want to consider that if our cities are underwater, if hurricanes, floods and droughts grow even more severe causing trillions of dollars in damage, if those droughts, floods and hurricanes cause crop failures and mass migrations which put pressure on political systems and cause wars, and more refugees, that pipeline won’t do us any good. We won’t have an economy.

Organic Torah looks at Judaism as a natural system—its essential principles of organization are the same as natural systems: they are organic.

Yet, apparently a lot of people don’t get the message. Otherwise we wouldn’t need to be carrying signs like this to rallies. That is because as simple and direct as “No Earth, No Economy” is, it asks us to shift away from the “normal” way we’ve looked at things. Modern economies have grown by using the resources of the earth pretty much as if they are limitless and therefore we don’t have to think much about them. Our world of business and economics has hummed along in its own bubble thinking about business and economics. What else should you think about?

“No Earth, No Economy” jolts us away from a false “either/or” dilemma which assumes either we can take care of the economy or we can care about the earth, but not both. For the people carrying the signs, however, it is clear that we must break down that false either/or. “No Earth, No Economy” opens our eyes to see our economy as nested within something larger: it is a part of the geological, biological, cultural systems of the earth. But not everyone has made that shift. Many people are still happy to listen to the stock market reports and conclude “business as usual.”

What does all this have to do with Judaism? At Organic Torah we believe that we’ll never solve problems such as climate change unless we change the deep, foundational ways of seeing ourselves in the world—and traditions such as Judaism provide alternative models of these deep, foundational world views. If we want it to feel natural to see the economy as nested within the ecology of the earth, that it is not an either/or, we’ll need to draw on models of life which see nestedness all around us.

After the Temple was destroyed, Judaism continued the principle of nested sanctuaries by creating rituals which remind us of the sanctity of the body, such as the tallit, or tefillin; others which focus on the sanctity of home and family, such as a mezuzah on the door, candles on the table; others, such as the Torah scroll, which designate sanctity in the synagogue, others in the larger community, and so on.

The central declaration of Judaism, the Sh’ma, is built around this principle of nested sanctuaries: The Sh’ma reminds us to love YHWH—The Unifying Oneness, Source of All Existence—starting from the inside, our holy of holies: our heart and our soul. Then we are told to remind ourselves on the borders of our bodies, the places where our bodies interface with the world: “bind them for signs on your hands and between your eyes.” We must also remind ourselves as we walk between the sanctuary of our homes and the outside world: “write them on the doorposts of your house and on your gates.”

The Sh’ma also says to speak of this Unifying Oneness when we walk on the road, and when we lie down at night and wake up in the morning. To me, this means that when I walk out into the wide world, and when I experience the beauty of dusk fading into night, and the pink light of dawn rising into day, I should remind myself that the earth is another sanctuary, another sacred vessel which holds and protects me as do my body, my home and my community.

The (organic) Torah reminds us to be aware of these nested layers and to let them become a model for all of our lives. This is one example of how Judaism can be a source for an emerging holistic way of thinking and being, offering powerful rituals and stories, context and community. These support exciting new directions in science such as systems thinking, which, like the Torah, looks for understanding not in breaking things down to separate parts, but in understanding their system of relationships. Together, they offer a vision of a new, 21st century culture of connection that we are all going to need to heal our world and ourselves. So that when I come to look for an energy source for building a thriving city or town, I won’t stop with the jobs created by a fossil fuel pipeline. I’ll be thinking of all the interlocking, inter-dependent connections between my heart and soul, body and home, my human community and larger community of plants, animals, soil, water and air.

Organic Torah Institute works to join the old and the new, to look for those patterns such as nestedness which connect, on a deep, structural level, Jewish tradition, the natural world and modern systems science. As we come to the limits of our “normal” world view which divides the world into impossible either/or dilemmas, we can bring our focus onto these natural principles—connecting our wisdom traditions to modern systems science and begin to shift our consciousness. We can begin to see the obvious logic in “No Earth, No Economy.”

Organic Torah furthers this goal by offering workshops, online and in-person classes, writings, videos and educational materials. Most of all we’ll be growing a diverse community of people who like the idea of integrating our intellectual, spiritual, physical and emotional lives; who are excited about building a new/old culture of wholeness and holiness. I hope that you’ll join us!