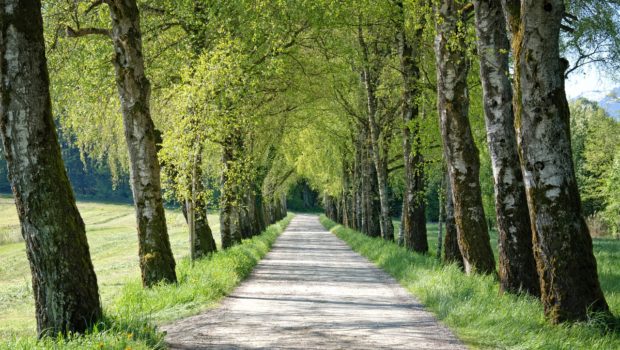 As we start this new time of beginnings, we’re very excited to announce the new offerings for Organic Torah membership for the coming year 2018 – 2019. For Individual Memberships we’re very proud to offer a monthly translation/commentary by Rabbi Margalit, in addition to regular webinars and discounts. Our Synagogue Membership has also expanded to include an Organic Torah private seminar series just for your synagogue. If your synagogue would like to bring Rabbi Margalit as a Scholar in Residence, we offer some suggested topics.

As spring finally arrives in New England I can’t help but feel amazed and enlivened by the budding, sprouting and greening of the world around me. Especially in the last few days when the trees all of a sudden sprouted their leaves back after the long winter of bare branches. It isn’t a gradual process. It’s a definite response to the changes in light, temperature, moisture and other factors—a set of catalysts that give the signal to the trees to bloom in the spring. We can predict the general time frame, but no one knows that exact moment any more than the meteorologists can always correctly get tomorrow’s weather forecast. One day the trees are bare and then, in a day or two, the trees are exuberantly green, a million new leaves suddenly arrive, and we have a new season.

It is a little mystery, this sudden sprouting, that reminds me that the best things that we enjoy in this world can’t be completely grasped or planned for or quantified. They come as a gift and we receive them best when we are open to the gift. Like the trees, there can be long periods of waiting, preparing, winters of dormancy, then, in the blink of an eye, we have Eureka moments. It works for creativity: I’ve had that experience many times with writing, when I’ve worked for days or weeks on something and then it finally comes together: a gift out of the blue. It works that way in love: when I finally met my wife (at a rather late stage in life), we had actually known one another for several years, but the time wasn’t right; there was a long winter of inner preparation before we were ready to really see one another.

I’m reminded of a piece of wisdom that I learned years ago from an unusual man named Yaakov. I was about 20 years old and working as a volunteer in a small, poor town in the Negev desert in Israel. Next door to the small apartment that I shared with other volunteers lived a long bearded, black hatted, wild eyed young man who was there as a kind of Ultra-Orthodox missionary to the poor youth of the town. He was only a few years older than me, and it turned out he was from New Jersey. He had grown up secular but had become very religious and went the whole nine yards, studying for years in yeshiva, and he was now there in another small apartment in our building with his pregnant wife, working as a scribe and teacher for his missionary group.

Yaakov took me under his wing, invited me for Shabbat meals and would off-handedly throw off bits of advice about the truth of the Torah and the rewards for doing every one of the 613 commandments exactly as our Sages had specified. Interspersed in a lot of things that were outrageous or offensive to my secular ears, there were bits that caught my attention, and which have stayed with me all these years. One such comment was a quote from the Talmud which says that “blessings only come to rest on that which is hidden from the eye.” He explained that you shouldn’t count the money in your wallet all the time because, you never knew, some day you might feel like you’re short on cash, but you’d say a little prayer and reach into your wallet, and, Praise God! there would be enough.

Yeah, right… I thought. Okay, he tended to say things like this all the time. But, I’ve found that if I don’t take it too literally, there is something to what he said: when we try to calculate and control all the factors in life, we can close down the possibility of surprise and new blessings. When I’m working on a piece of writing, I have to put in the time to hammer it out, but often it’s when I stop pushing and go for a run or take nap that the ideas come together. When my wife and I finally saw one another with new eyes, we didn’t embark on calculating the cost/benefit analysis, we took enough time to make sure the feelings were real, and then we accepted the gift.

And when I met that strange, fanatical, Ulta-Orthodox neighbor in Israel I didn’t fight tooth and nail for my logical Western reason. I made my objections but also had the openness to take in the mysterious, beguiling kernels of wisdom that ended up changing my life and leading me to my spiritual path, my vocation and career.

In our contemporary world we prize control and predictability. We like to see our balance sheets add up and we don’t want to go out on a limb with things that haven’t been proven. These are very fine values to have, up to a point. But, if that is the only way that we see the world, we could be like the person in Yaakov’s example: trying to tightly control everything, and so closing off the channels of blessings that can come as a gift from a place of mystery.

The sudden blossoming of spring, coming on a day that we couldn’t, with all our science and technology, exactly predict, hints at a different dynamic that is also true: We can’t force a gift (then, by definition, it’s not a gift), but we can offer up our hard work and diligent preparation, not as an attempt to master our fate, but as a gift in the cycle of life’s gifts. Then sometimes, if we are fortunate, abundance comes back to us, we can receive it with amazement, humility and gratitude.

We, at Organic Torah are so grateful for all the gifts that we’ve received this past year. We now have almost one hundred individual members not including all those who have received membership because their synagogue joined Organic Torah. We, for our part, are excited to give back and keep the channels of blessing going. Check out our new, expanded membership offerings for the 1018 – 2019 year. We are also anxious to share some topics for scholar in residence opportunities with Rabbi Margalit.

“Beyond Either/Or” — An Excerpt from The Pearl and the Flame →

More Praise for “The Pearl and the Flame” →

2 Responses to Spring, the Gift of Abundance, and New Membership Offerings!